This annual club competition awards trophies to the best junior in each age group. the 2014 Champions are:

Trophies are awarded to the best junior in each age group category from M/W10 to M/W18. NOR currently has two East Anglian Champions: Ella Gilbert – W18 and Sam Nicholls – M18 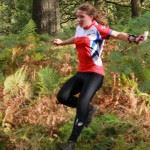 In addition to the national events such as British Championships, there are other competitions held specifically for Junior competitors: 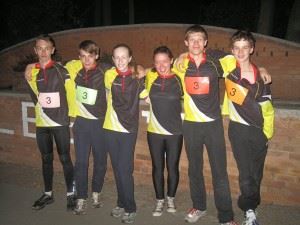 NOR team competing at the 2014 Peter Palmer Relays

This is a night / day relay for teams of 6-8 competitors. The first runner setting off about 5 in the morning so that two /three runners compete in the dark. In 2014 some leg runners had GPS tracking devices so that their progress could be watched on a big screen  – greatly adding to the excitement of the event.

The Yvette Baker Trophy is the premier Junior Inter-Club competition for English and Welsh clubs. It is named after Britain’s first World Orienteering Champion, who won Gold in the Short Distance event in Scotland in 1999. It is held annually and is for club teams comprised of junior orienteers of all standards.

The twelve regions of the United Kingdom compete against each other in an individual and a relay event. The top two runners from each region in the individual event and the top two boys and girls relay teams count towards a total score to determine the Regional Champions. The age groups are M/W14, M/W16 and M/W18.

May
29
Sun
10:15 am Urban (UKUL and SEOUL) @ King's Lynn
Urban (UKUL and SEOUL) @ King's Lynn
May 29 @ 10:15 am
New area, based around the Event Centre at the “Alive Lynnsport” leisure complex in North Lynn.   The area comprises a variety of different types of housing estate, dependent on when they were built. Hopefully, you will be suitably challenged … END_OF_DOCUMENT_TOKEN_TO_BE_REPLACED
View Calendar
Add