There are two ways you can orienteering in Norfolk, either at events put on by the club at woodland venues around the county or by visiting one of the permanent courses.

Most orienteering maps are drawn specially for the sport and are at scales of either 1:10,000 or 1:15,000. You can take a look at some of our local maps using links on the Event Venues page. The maps show everything from large hills to smallest pits, open land to impenetrable forest, ditches, marshes and much more. The colours are different from those on an Ordnance Survey map so beginners need to study them carefully. Most symbols are also unique to orienteering, but there is usually a legend on the map. Maps are drawn with the North lines pointing to Magnetic North, so when using a compass there is no need to make any complicated adjustments. Download a full guide to map symbols here. 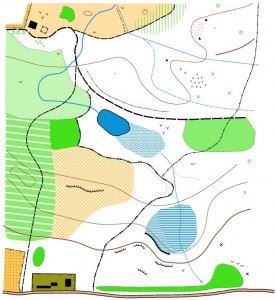 Here is an example of part of an orienteering map. The black lines represent paths, their thickness indicating their size. The yellow area to the North (the top of the map) is heathland. South of that is woodland, the white areas being runnable, the light green less so and the dark green impenetrable. The vertical green stripes show undergrowth sufficiently thick to slow down a runner. Over the whole area there are various brown markings, some being pits or depressions, others earth banks or embankments and still others knolls or larger hills. The black crosses represent tripods built as controls in parts of the wood where naturally occurring features are lacking. There are also contour lines running across the map, some crags following these contours, ditches, a pond and marshes. The large yellow and white speckled area indicates more open land but this time with scattered trees. The olive green at the south of the map is a settlement with houses shown in black. In the SW corner is a small area of cultivated land, separated from the surrounding woodland by a fence.

The colours are an integral part of the map symbols:

Black is used for most man-made features such as buildings and rock features such as cliffs, crags and boulders.
Brown is used to show landform, including contour lines, gullies, pits and knolls (small hills).
Blue is used for water features such as lakes, ponds, marshes and streams
White and Green are used to depict the density of woodland and the extent to which it impedes progress. Open ‘runnable’ woodland is left white with progressively darker shades of green mean increased density, ranging from ‘slow run’ to ‘difficult’ (or walk) through to ‘impenetrable’(or fight).
Yellow is used for unwooded areas with a solid yellow for grassy spaces such as playing fields and a paler yellow for rougher terrain (‘rough open’) such as heather.
Combinations of yellow and green show other types of terrain which will be explained in the legend.