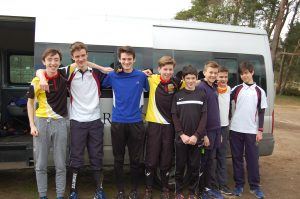 Congratulations to our twelve juniors who took part in the East Anglian qualifying round of the Yvette Baker Trophy today at Knettishall Country Park. They scored a total of 894 points beating Essex Stragglers by a margin of just 4 points!

Every year Norfolk’s juniors take on the other East Anglian counties in an orienteering competition called the Yvette Baker Trophy. The prize at stake is a place in the national final, and Norfolk have never won this prize, until this year! Today the Norfolk squad went into the contest daring to believe that this could finally be our year. Benji Tremelling got the ball rolling by winning the 2km yellow course, with Keziah Bailey 13th. On the 3km orange course, Georgie Nicholls was the first girl while Josh Kohler and Patrick Thomas were 2nd and 4th boys. On the 4km light green course, William Bartram, James Price and Callum Stirling were the top 3 boys and Emily Jackman was 2nd girl. And on the 5km green course, Steven Denby, Tom Bartram and James Thistlewood were 1st, 2nd and 4th. Overall this meant that we won the regional heat for the first time ever, beating Essex into second place by 4 points. We will now compete at the national final in Northumberland in July.