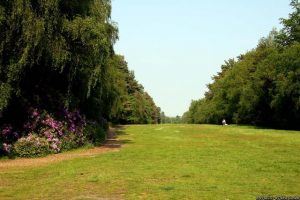 Sandringham is an area which is being very actively managed with areas of tree thinning and rhododendron clearing, while in other areas the rhodos run rampant, so the first task was to get the map as accurate as possible. I hope I caught the important changes, and I’m aware there’s more work to be done!

My planning was quite rusty so I’m very grateful to my Controller, Sarah Mansel, for clear guidance. It’s a terrific area for the region, with its variety of terrain and contour detail for the more technical courses. While a couple of people found the problems I’d missed, the majority seem to have enjoyed the challenges of the courses. Thanks for the kind comments, and also the helpful advice.

I’m very grateful to Leanne and Keziah Bailey, who helped me set out a lot of controls on Saturday, and to all the control collectors that Alan Bedder found for me – dividing the map between them proved a logistical challenge!

Finally thank you all for coming, and bringing such fine weather with you.

It has been a pleasure to work with Julia, and I hope that you all enjoyed her challenging courses on such a beautiful spring day. There has been much clearance of rhododendrons in the last few years and the bracken was generally low enough to not impede running too much. I think we all may be a bit rusty and are still getting used to the routine of regular orienteering, and my knowledge about the proximity of controls has been improved so hopefully I won’t offer the same advice in future. Thanks to the Bedder family for organising the event and all the other NOR helpers needed to make the event run smoothly.

May
29
Sun
10:15 am Urban (UKUL and SEOUL) @ King's Lynn
Urban (UKUL and SEOUL) @ King's Lynn
May 29 @ 10:15 am
New area, based around the Event Centre at the “Alive Lynnsport” leisure complex in North Lynn.   The area comprises a variety of different types of housing estate, dependent on when they were built. Hopefully, you will be suitably challenged … END_OF_DOCUMENT_TOKEN_TO_BE_REPLACED
View Calendar
Add