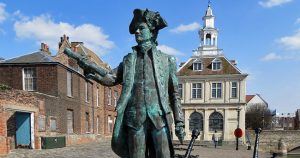 I’m sure they didn’t forecast that rain.  At least it dried up (mostly) later.

Thank you all for coming, we certainly had more entries than for our last Urban!  Course 5 proved very popular, so we only had one map left over, and fortunately found a few spare Description lists for those that wanted them (most of you I think!).

It just takes one little thing to play up, and it throws the timescales out.  Our start clock decided not to beep the correct intervals first thing, so that delayed me putting out the taped route to the Start.  Apologies for the bemusement some of you felt.

Otherwise, things ran pretty smoothly, thanks to the lovely accommodating helpers!  So many orienteers are based in Norwich, it’s a struggle to get enough people to help out west, so special thanks to those who did more than one shift, and to those who were “persuaded” to collect controls at the end.

I will also mention the venue which people seemed to appreciate, and I would particularly like to thank the Alive Lynnsport team who were very helpful throughout the day.

Thank you all for coming, it is a good feeling to see so many people enjoy themselves.

I would also like to thank all the control collectors, especially those for which it was there second (or third) job of the day. Thanks also to Michael for controlling, checking the map and generally improving my courses.

Having planned the last event in King’s Lynn, I didn’t particularly want to plan on the same area again, as it had significant restrictions and I felt that I had exhausted all the options for interesting courses. I think it needs a fresh pair of eyes to tease out the possibilities around the town centre and quay. Thus I embarked on another mapping / planning exercise. I quickly decided that the area around Alive Lynnsport offered some interesting terrain, so started on the map. My initial plan was to take the longer courses to the Gaywood and Fairstead estates to the south east of Lynnsport, but was adivised against this by Michael (a local), due to the high levels of vandalism in these areas. Maybe somebody braver than me will put on an event there in the future, as it is cracking urban orienteering terrain. Consequently, I took the longer courses west, which I think offered some interesting route choices.

All the courses visited the 2 estates either side of Lynnsport Way, which as someone mentioned had more of “sprint” feel to these legs. Whether these estates were less prone to vandalism than Fairstead, I don’t know, but fortunately we had no incidents today. There was then the long leg north-south. On all courses, it was in fact shorter to run through the Lynnsport grounds rather than taking the northern route, which was just dead running. However, I should have probably made the “Lynnsport” route more advantageous, as I see on routegadget that a lot of people took the “boring” route. It was, in fact, about 50m to 100m shorter through Lynnsport, but the navigation, especially at the beginning of the leg, would probably have wiped this advantage out.

I guess the biggest area of controversy was the mapping of the paths in the small bit of scrub / forest (Salter’s Sanctuary) towards the end of the courses. The problem was that seasonal paths kept popping up throughout the planning process, so after discussion with Michael, I decided to only map the “managed” paths, which were also the ones marked on the maps at the entrance to Salter’s Sanctuary. A lot of people turned right on to one of the seasonal paths, which became more “path-like” as the morning progressed. However, I would suggest that people were still in “urban” mode, i.e. turn first right, whereas if you look at the map, you come out of the scrubby forest having crossed an earthbank. At this point the path skirts a large open area before splitting, the right hand fork taking you to the control. There is also a large knoll south of the path, just before the path junction. When people turned right, they were only about 10m from the earthbank and at the start of the open area. As our club captain said “A bit of forest in an urban event is always sure to catch me out”. Hopefully, it did not spoil your enjoyment of the courses today.

Any feedback would be most welcome at jonathan (AT) norfolkoc.co.uk.

Great event today – Jonathan Gilbert’s courses were well received, even the rain did not stop the smiles. Julia as usual was the proverbial Swan, ensuring even with a much reduced number of volunteers the event ran smoothly.

Well done and thanks for the late volunteers to get the controls in.