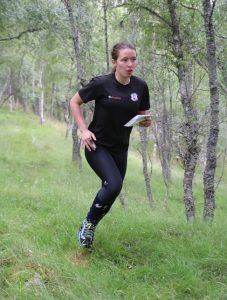 A Report from Ella Gilbert

In August of this year, I was lucky enough to get to attend a training camp held in Gothenburg. The camp is for 18 and 19 year olds, and is a week long. This year for the last few days we travelled to Stromstad to take in the World Championships, and do the spectator races.

I arrived on Saturday morning, and we spent the day getting settled in and organising our training for the week. The Gothenburg camp aims to help prepare juniors for organising their own training, so is more of a ‘self-help’ camp than a coaching one. While Mark and Alice (the organisers) were happy to give advice and guidance, we were expected to know what we were doing on each day, and decide for ourselves what we actually used the training for.

On Sunday we jogged from the club hut we were staying in and did some training on a nice (if overgrown!) area that was very similar to lake district terrain. After going on the Stockholm tour the year before, I was used to associating Sweden with vague, small contours. But the areas around Gothenburg were more obvious and less confusing. While I wasn’t overly happy with my navigation, I felt it was a solid start to the day. After eating lunch we returned to the hut. The afternoon’s exercise actually had the start triangle on the cub hut, and went around the lake we were next too. It was pretty long (I think I did 11km in all!) but I really enjoyed it. To avoid having to hang controls, we did the exercise in groups of three, and people were used as controls. It was pretty complicated, but worked very well – despite the downpour in the middle! I very much enjoyed it, and was pleased with my navigation, especially in navigating to control sites without controls there.

After a hard day I was in charge of cooking dinner, which I think was a success, despite the power going out halfway, and then working only if we didn’t use the oven, meaning the apple crumble had to be microwaved in bits!

The next day we went to a fairly green area. I was helping with control hanging that day. I can’t say things started that well, since we managed to forget the controls! Using bits of shoe tape as controls didn’t work that well, and after spending well over an hour trying to locate control sites (and failing on a good few) I wasn’t feeling too pleased with myself. I went round an area that was again very lake district-ish, and managed to perk myself up a bit, though the time spent control hanging meant it was a fairly short session!

Instead of doing training in the afternoon the girls decided to do some night-o, so we spent the afternoon relaxing, and then once it began to turn dark, we headed out into the dark (and wet!) regretting our decision quite a bit. We did it in a trains format, with everybody meeting up every few controls and then starting at short start intervals. It was good to have the security of the train, and meant we navigated faster than normal. I have very mixed feelings about night-o, but I really enjoyed this session and felt it was really useful. The area was nice (vaguer than previous days, which made the night-o even harder!) and despite overestimating our abilities a bit when planning the course, and having a very old version of the map, we got round.

The next day I didn’t feel so great. My chest was really tight, running was quite painful, and I had the beginnings of a sore throat. However I decided to do that day’s training. Despite not being able to do much, I think Tuesday’s area was my favourite. It wasn’t super obvious, but I could understand the contours, and my visualization worked really well. I found I couldn’t run, so I mainly walked. When I got back I decided not to do anything else (I had taken quite a while at my slow pace!)

That evening the club whose hut we were staying in were holding an event, so we did that. I was on the same area as Sunday’s round the lake, and afterwards everybody had a meal together. I wasn’t feeling any better, so did about half the course before heading back. After a delicious tea, I went to bed, feeling really awful. That was the beginning of the end for my week. What I thought was a common cold never went away, and for the rest of the week I struggled to walk anywhere, and couldn’t even imagine running. When I got back home, it was diagnosed as pneumonia, so at least I had a good excuse!

On Wednesday everybody went and did a course from the junior world championships a few years ago. I wasn’t feeling up to running, but I went along and hung a couple of controls, and then once everybody had finished we spent the afternoon shopping. On Thursday I wasn’t up to even getting out of bed, and spend the day dozing and feeling miserable. From what I’ve heard the training that day was great, and it was beautiful day, but sadly I couldn’t take part. It was very frustrating to be in one of the best countries for orienteering and not be able to do
anything, but even trying to run through it on the first day probably made things a lot worse, so I’m glad I didn’t push it any more.

On Friday we travelled to Stromstad. Throughout the previous week the world champs had been taking place, and we arrived in time for the last two spectator races (Saturday and Sunday) and the relay (Saturday). I had really, desperately hoped I would be well enough to do the races, because I had been looking forward to them for months, but I just couldn’t face even walking around a few controls. I did go to watch the relay, and as I found last year in Scotland, it was a great experience (made better by watching GB men get a great 4th!).

On Sunday I spend the day in the car, and then finally on Monday morning I flew back home. By that time I was grateful to be back in a comfortable bed and be able to relax. I really enjoyed the few days of Gothenburg I got do, and found very useful. I’m still disappointed I didn’t get to do the whole week, but there was nothing I could do.

Many thanks to Mark and Alice for organising the camp and helping us all out throughout the week!