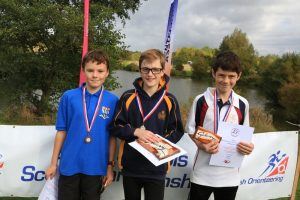 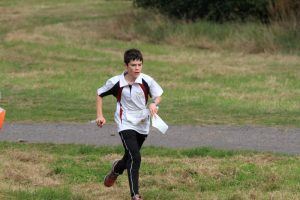 Eleven Norwich School pupils travelled to Bagworth Heath in Leicestershire on Saturday for the British Schools Score championships. All age-groups had 45 minutes to find a maximum of 31 controls. The headline result was a silver medal for William Blyth-Bartram in year 8. William got 28 controls, which was the joint highest score, but arrived back 16 seconds late, thus incurring 5 penalty points, which meant he finished in 2nd place. William only took up the sport 12 months ago, but has already started training with the East Anglian Junior Squad, and was named Newcomer of the Year at the NOR awards in June. Now he has his first national medal!
Other impressive results came in year 9 – Josh Kohler 5th, Monty Platt 9th and James Price 10th, while in year 11 Steven Denby was 10th, James Thistlewood 15th, Tom Blythe-Bartram 16th and Katja Ruda 18th.