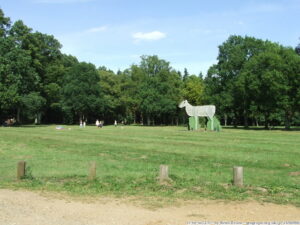 Thank you to everyone that came to the Lynford event. It was great to see so many old faces from the past back orienteering in the forest. We were very lucky that the weather was probably the best day we have had for several weeks and made competing in the forest more enjoyable.

A lot of work went on behind the scenes to enable the event to go ahead which most competitors are not aware of. We had problems in trying to get land permission, which is becoming increasingly difficult for all clubs and events, however, after several attempts, I managed to get the correct documentation to Forestry England.

Then during the planning work Jonathan Gilbert found that areas he wanted to use were being felled or thinned. This happened a number of times during the planning process even after he and the controller Phil Halford had tagged and checked the sites. Jonathan had to re-plan the courses on several occasions, right up to 10 days before the event. So, a big thank you to Jonathan and Phil for their efforts and for producing very good courses under difficult conditions.

A special thank you to all the helpers, without who the event would not go ahead. In particular thanks to the car park marshals who managed to get everyone parked safely. I was worried about the small area that we had for parking and we got pretty close to filling it all. I think we had only 3 spaces left when competitors started to leave, freeing up more space.

Thank you to everyone who passed on such nice comments about the courses and the event in general.

Finally, I must thank the landowners, Forestry England for giving us permission to hold the event.

Here’s looking forward to the next event at Beeston Regis.

I hope that you enjoyed your course today. The feedback I got was positive, which is nice to hear. And, the weather was kind to us given what it has been like the last week or two.

I guess that if we’d known at the beginning of the planning process what we know now, the courses would have ended up very different, and we may have even opted to use the northern start by the arboretum. However, it’s nice to use a different start once in a while, as it gives people a fresh view of an area and for people running the shorter courses they may never have orienteered in the area by Lynford Stag. Fairly early on, we were told by Forestry England (FE) that we couldn’t use the blocks of felled forest north of the bit of white forest by the start, up to the road. This wiped out my white and yellow course (re-plan 1). For the longer courses, my original plan was to take them up the western side of the map, over the road and then back down the eastern side to the far south and from there back to the finish. This plan had to be revised and then eventually abandoned when FE started thinning the eastern & southern blocks of forest (re-plan 2 & 3). About 2 weeks before the event, I was in an area of the forest, that I later learned was called the Catholic Church, looking for control sites for the longer courses to bring them back over the road. This is the bit of “slow run” to the east of the road crossing and north of the road. There is small abandoned church in the settlement area to the north west of this, hence the name. Anyway, I came across a forester happily clearing the rides. I got chatting to him and found out that they were going to start clear felling the area the following week. As I say, this was 2 to 3 weeks before the event. I had a chat with his boss who was very accommodating and said that they would try not to fell the bits we wanted to use, but I decided that it was best to cut our losses and avoid the area completely (re-plan 4). Having re-visited some of my original control sites, we made the right decision to abandon areas near where forestry work was happening, as a lot of the forest and control sites have been completely trashed. The last re-plan was self inflicted. We had decided not to have a manned road crossing, which would have precluded juniors under 16 from running the green & blue courses. At the last minute we decided that this was not tenable, so added the road crossing. This resulted in the courses becoming longer than the guidelines, but it also meant 7 juniors were able to run these courses, so I think it was definitely the right decision.

On the subject of juniors, it is real shame that we only got 2 entries for the yellow course and 0 for the white. For these regional events, where you only want one start and one finish, the white and yellow courses dictate where these are placed and set the parameters for the whole event. At certain points in the planning process, due to the FE felling, I wasn’t even sure that I could actually plan a yellow course to the BOF guidelines; I played around with moving the start a couple of times until I got something that worked. In some ways, I’m glad no-one did the white course as it was particularly uninspiring, being just a walk round a single block of forest. It would be really good to be getting 20+ entries on these courses and then all the effort would be worthwhile.

This is turning into a bit of an epic, but a group of us had a discussion about fences mapped as impassable/un-crossable and whether it was allowed to cross them. I’ve since done a bit of research, and it would appear that the confusion comes from a difference in the rules between normal forest orienteering and sprint (urban) orienteering. In the IOF rules (Section 17) (available here) it defines what is not passable/crossable. For forest orienteering this is basically Out of Bounds areas, such as symbols 520, 708 etc. For sprint orienteering it additionally includes impassable features such as symbol 515 (impassable fence). So, in forest orienteering you can cross an un-crossable fence (!), but in sprint orienteering it is against the rules to do so. I guess that the moral of this is, that a fence (or wall etc) should be mapped as to how it is physically and not mapped to indicate that you don’t want people to cross it; and this assessment is based on what a fit 21 year old could cross. IOF suggest it needs to be 1.5m high for it to be deemed impassable/un-crossable. In forest orienteering if you don’t want people to cross a fence, whether it is mapped as passable or impassable, it should be overprinted with a purple line (symbol 708); which is what we should have done for the field with horses in it to the west of #193 on the blue and brown courses. If you think I have this completely wrong or have any other comments let me know at jonathan AT norfolkoc.co.uk.

As ever, it was a pleasure to work with the controller Phil Halford (SUFFOC) who improved the courses and never complained each time I told him of the latest re-plan and that he would have to go out into the forest to check some new control sites. He also carried out a lot of updates to the map, in addition to the re-map he carried out at the start of the pandemic.

Jan
26
Wed
6:45 pm Club Night (Run) @ Lingwood
Club Night (Run) @ Lingwood
Jan 26 @ 6:45 pm
Meet at Lingwood Village Hall, Station Rd, Lingwood, Norwich NR13 4AZ. For further information, contact Ben Bethell. Any late changes will be posted on facebook (and hopefully a link here). The run will be approximately 5km. Drinks in bar afterwards. … END_OF_DOCUMENT_TOKEN_TO_BE_REPLACED
Feb
2
Wed
6:45 pm Club Night (Turf) @ UEA
Club Night (Turf) @ UEA
Feb 2 @ 6:45 pm
This is open to everyone. In Turf terms it is a closed / private event, so you need to pre-register; either send an e-mail to Ben or post on facebook. On the day, just turn up in the area, at … END_OF_DOCUMENT_TOKEN_TO_BE_REPLACED
View Calendar
Add