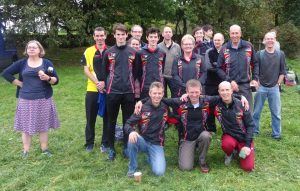 We made our first ever appearance in the CompassSport Cup final on Sunday, held by Walton Chasers at Abraham’s Valley. While the final result reflected our status as debutants, we can at least now say we’ve been to the final. And Tom Bartram ensured that NOR got plenty of airtime from the commentators. Tom led the run-in competition for a considerable chunk of the day, and was joined in a share of the lead by Steven Denby and myself, before finally being pipped for the Golden Boot by 1 second by last year’s British Sprint Champion. Still, 2nd out of 1017 isn’t bad.

Some of us had waited a long time for the chance to appear in the final, and thought it might never happen. So many thanks are due to everyone who ran so well in the qualifying heat, back at Shouldham Warren in March. Thanks also to everyone who made the long journey to Cannock Chase, ensuring we had a team of 35 on the day.