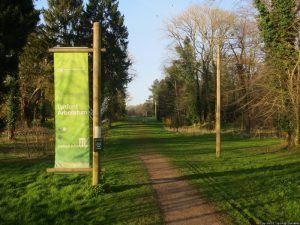 To have such a good turn out on the 100 years Remembrance Sunday was amazing and thanks to everyone as we held a 2 minute silence to remember all those lives lost, around 20 million according to the news.

The weather was a lot kinder than last December with sunshine most of the day and beautiful autumn colours in the forest!

Thanks to Sarah Mansel who controlled the event, again, and to Paul the planner who had some good courses.

My thanks go to all the helpers who made my job easy on the day. A special thanks to those who came and helped but didn’t run. Phil, on starts, came from Peterborough just to help and be involved in the club. Sue Stirling, Fergy, Julie Price, Margarita and our amazing SI man Daniel all devoted their time without having experienced the forest.

Without the volunteers we would not have a sport, anyone who enjoys our orienteering events please think about giving an hour of your time at the next event.

Sandringham on 2nd December is an East Anglian League event, organiser is Alan Bedder. It is a fabulous area and you can pre-enter on Fabian4. If you are a helper you get a reduced rate, Alan can give you a helper code which gives you a discount. See the flyer on the website for details.

Many thanks again to everyone that helped and to all the orienteers who came along!!

May you always run in sunlit forests………

Controlling a repeated event is much less work than having to start from scratch again. The control sites were the same ones, so it was just a case of checking that the tapes and kites were all in the right places. Some of the thickets were a bit troublesome, so I hope we got the right ones in the majority of cases. I think it was a fair decision to downgrade this event, and thankfully this didn’t seem to affect the numbers attending.

I’d like to apologise for not noticing that the northern finish, used on all the TD5 courses, did not appear to have been synchronised with the other SI boxes. There are some silly split times from control 200 to the finish. It is difficult to notice this sort of error as the finish box is often not put out in place until just before the courses open. This error on this occasion should not cause any issues as everybody on the same course will have used the same finish box – they will just all be wrong by the same amount.

As ever it is a pleasure to work with both Kim and Paul, so I hope that all participants appreciated all the work they put in to make the event happen again. The weather was kinder to us this time, and the autumn colours in the Arboretum were delightful.

May
29
Sun
10:15 am Urban (UKUL and SEOUL) @ King's Lynn
Urban (UKUL and SEOUL) @ King's Lynn
May 29 @ 10:15 am
New area, based around the Event Centre at the “Alive Lynnsport” leisure complex in North Lynn.   The area comprises a variety of different types of housing estate, dependent on when they were built. Hopefully, you will be suitably challenged … END_OF_DOCUMENT_TOKEN_TO_BE_REPLACED
View Calendar
Add