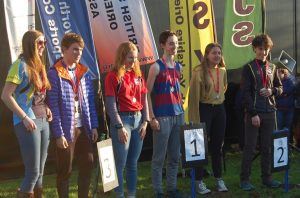 Junior club captain Steven Denby fulfilled a long-held ambition on Sunday by winning the British Schools Championships. Steven first competed at this competition when he was in year 7 in 2012. In that time he has come 13th, 2nd, 5th, 3rd, 10th, 3rd, and now, in his last year, he has finally won the gold medal.

This year’s competition took place in Blackburn, and Steven set the leading time of 39:29 early on. We then had a nervous wait of over an hour while everyone else tried to beat him. Matthew Clarke from SUFFOC was always going to be one of the big threats, so when he posted 41:42 we started to believe this could be Steven’s year. 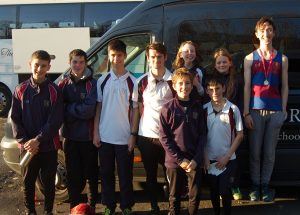 Eventually it was confirmed that Steven had won, and was declared the Year 13 British Schools Orienteering Champion for 2018, emulating Ella Gilbert’s win in 2015. Following on from the Jukola and the Compasssport Final, it was great to see NOR and SUFFOC together on the podium. There were also impressive 6th place finishes for the Bartram brothers, and 5 juniors made their debut at this level. 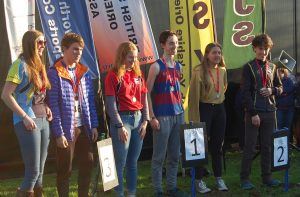 Full results can be seen here. EDP article is here.